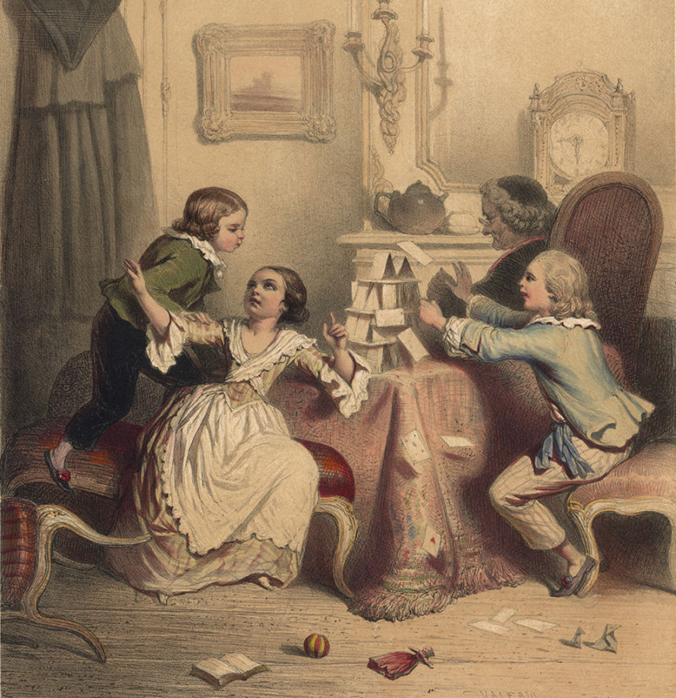 Playing cards is a popular pastime today, but the history of card games dates back many centuries.  By the early eighteenth century, the tables specifically designed for playing cards appeared in England.  The basic form of these tables was a rectangular top that folded in half.  When opened, the top would be supported by legs that would swing out and support the weight.  The corners of these tables were sometimes featured carved wells for candles and counter wells to hold money or counters.

Today we are featuring of a selection of card tables in our collection to demonstrate the shift in style over the eighteenth century as taste for timbers, decoration, and mechanics changed and evolved. 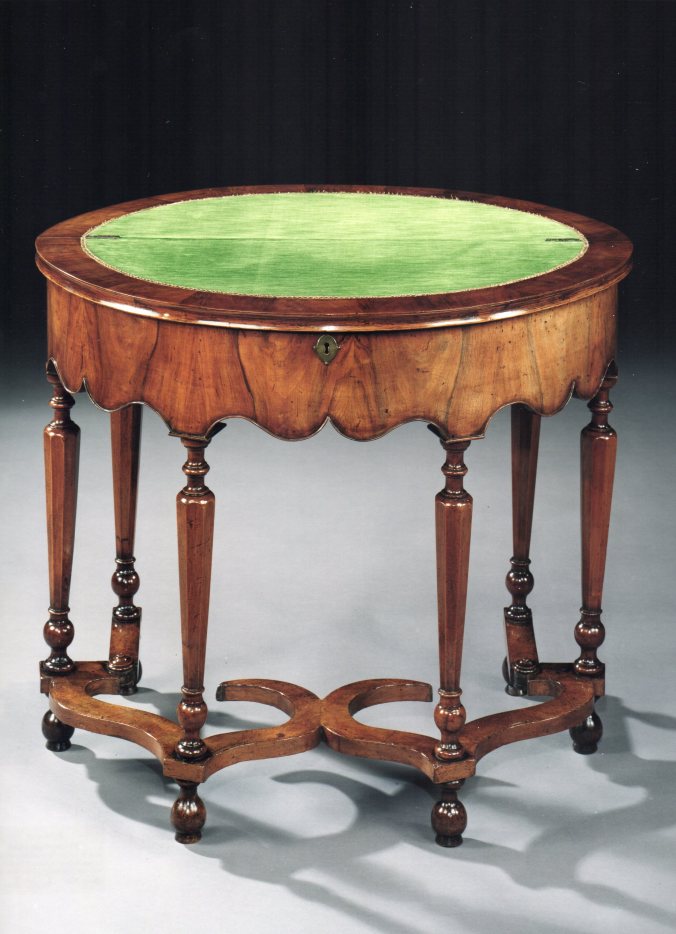 Pictured above is a very fine quality rare late seventeenth century William & Mary period walnut half-circle card table.  The fold-over hinged top is cross-banded with two herringbone inlaid borders, and the interior is lined for playing cards as shown in the second photograph, with a fitted storage well below with shaped brass escutcheon and lock.  The double serpentine shaped apron raised on six tapered octagonal legs united by elegant shaped stretchers supported on original bun feet.  Overall this table is magnificent with a beautiful colour and patina throughout.

This extremely fine and rare Queen Anne burr walnut and yew-wood concertina action card table shows the development of card tables in the early eighteenth century to the traditional square form, though still using walnut, which predominated English furniture through the beginning of the century.  The shaped top is cross-banded and with herringbone inlaid borders, the surface lifting to reveal a baize lined interior with candle stands and guinea wells. The frieze is similarly cross-banded, standing on circular tapered legs with capitals and pad feet.

The concertina action is a more complicated form than a traditional gate-leg mechanism, which demonstrates the skill of the craftsman.  Additionally, this table retains its original hinges in the mechanism and is in remarkably good condition. 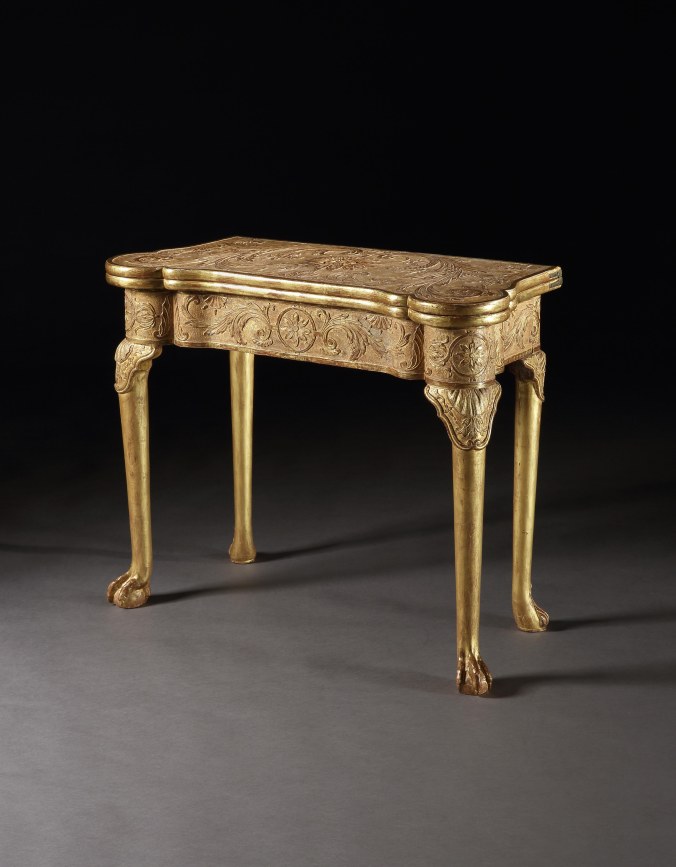 Moving into the Georgian era, card tables became more elaborate and varied in form and decoration.  Shown above is an exceptional and very rare George I gilt gesso concertina-action card table–it is one of only three or four known examples.  The shaped foldover top is decorated throughout with deeply carved scrolling foliage centred by a flower head on a pounced ground, and the top opens to reveal a velvet lined playing surface with counter wells and candle stands. The whole stands on slightly cabriole legs terminating in claw and ball feet.

The other known examples:

Taste for timber shifted from walnut to mahogany in the middle of the eighteenth century with the importation of this tree from the Americas.  This important George II period table is a triple-top version of the card table, meaning it features surfaces for both a games-table and tea-table of the finest quality. The cross-banded top opens to reveal at first turn, a tea-table, similarly cross-banded and of excellent colour, and then opening again to reveal a green-baized lined games-playing interior, with mahogany candle-stands to the corners. The frieze is mounted with a beautifully carved central cartouche formed from C-scrolls and flowing acanthus leaves. The whole stands on four beautifully carved cabriole legs terminating in well-formed ball-and-claw feet, the pierced claws in brass. The mahogany on this table is of exceptional colour throughout and reflects the taste for furniture made from this newly imported timber.

This superb quality George III mahogany serpentine card table with its fretwork designs highlights the taste for Chinoiserie decoration, popularised by designers including Thomas Chippendale, William Chambers, and John & William Linnell.  The rectangular moulded hinged top opens to reveal a green-baize playing surface, which sits above a deep plain frieze on super blind-fret-carved chamfered legs, each with pierced fret brackets, and standing on block feet. The leading edge of the front legs are also beautifully inlaid with additional fretwork patterns.

By the end of the eighteenth century the taste for neoclassicism was at its peak.  This style called for restrained silhouettes and classical adornments drawn from antiquity.  This very fine George III Hepplewhite period mahogany and satinwood banded serpentine card table embodies this style.  The well figured serpentine fronted and moulded top features satinwood banding, ebony line inlaid edge and retaining excellent colour and patina.  The top opens to reveal a baize covered playing surface, below with a serpentine frieze veneered with striking flame mahogany and to each front corner a carved leaf paterae.  The table is supported by four turned tapering stop-fluted legs, with lower ring-turning and leaf carved bulbous foot. 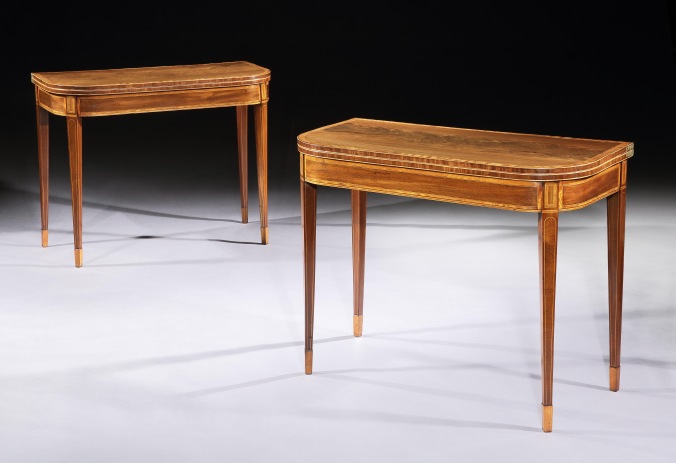 We are finishing our journey through the development of eighteenth century card tables with this pair of mahogany card tables: because two is better than one!  Pairs of card tables were popular because they suited interior  layouts and could add attractive symmetry to a room.  This fine pair of George III period mahogany D-shaped card tables, each with satinwood crossbanded foldover tops, enclose a green baize playing surface and stand on square tapering legs. The mahogany on this pair is of a particularly fine colour throughout.

Card tables have been relevant for the past three hundred years, and they are still incredibly useful, and not to mention stylish, for contemporary interiors.  The variety in shapes, materials, designs, and aesthetics of eighteenth century card tables demonstrates the sophistication of the cabinetmakers of the day.  The survival of a number of these fine quality card tables today makes them ideal for continued use, whether for card playing or any other assorted use.

2 thoughts on “A House of Cards: Exploring English Card Tables in the Eighteenth Century”