We are highlight an exceptional George II carved giltwood table in the manner of William Kent as today’s Great Provenances exhibition spotlight.  The table, with its Portoro Nero marble top, features a boldly gadrooned edge above a central mask flanked by scrolling acanthus leaves with swags of carved flowers.  The table stands on carved cabriole legs surmounted by superbly carved shells and stylised flowers and foliage, which terminate in magnificent ball and claw feet.

The table comes from the collections of the Earls of Lovelace, presumably at Ockham Park, Surrey and later at Horsley Towers, Surrey. 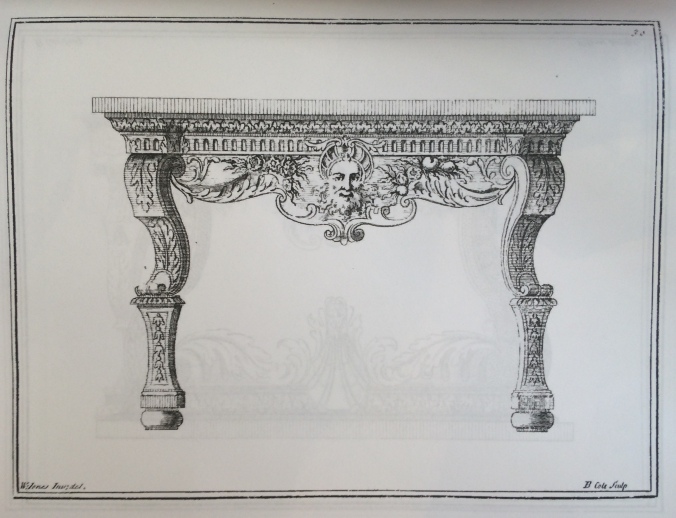 William Jones, ‘Designs for Frames for Tables,’ The Gentlemens or Builders Companion, 1739

The table reflects the influence of William Kent (1685-1748) and his circle with its inclusion of Palladian motifs, including the central mask and draped floral garlands.  A drawing by Kent in the Victoria & Albert Museum shows his design for a side table at Houghton Hall, Norfolk, which was published in John Vardy’s Some Designs of Mr. Inigo Jones and Mr. William Kent (1744, pl. 41).  This design features the prominent central carved mask and dramatic floral swags.

The present table also shares a particularly close affinity to the designs of William Jones as seen in his 1739 publication, The Gentleman or Builder’s Companion, for ‘Frames to Tables’ (pl. 28, 30).  These designs include the distinctive use of the carved mask on the central frieze combined with draped garlands and acanthus scrolls.  It is notable that the present table features shell carved cabriole legs and ball and claw feet, whereas most of the designs show the scrolled canted legs and feet.  These design features might align this piece with the slightly later designers of the George II era, including Matthias Lock, who incorporated dramatically carved ball and claw feet on a number of designs.

The stands for a pair of cabinets, on display at Temple Newsam, bear strong resemblance to overall design of the present table.  It is thought that these were installed at Temple Newsam by the Honorable Charles Ingram (1727-1778) and his bride Frances Shepherd (1733-1807) after their marriage in 1758.  The 1808 Temple Newsam Inventory records the cabinets as being in the Breakfast Parlour.  Although there is no record of their original invoice, there is a charge of £9 on November 7 1758 to Richard Kerby, cabinetmaker, Sackville Street, London for ‘New Gilding 2 Rich Carv’d frames for cabinets in the Best Burnish’d Gold.’  The stands of these cabinets similarly date to the 1730s.  However, the construction of the Temple Newsam pair is notably different than the present example which has a much sturdier frame to presumbably allow for the weight of a substantial marble top. 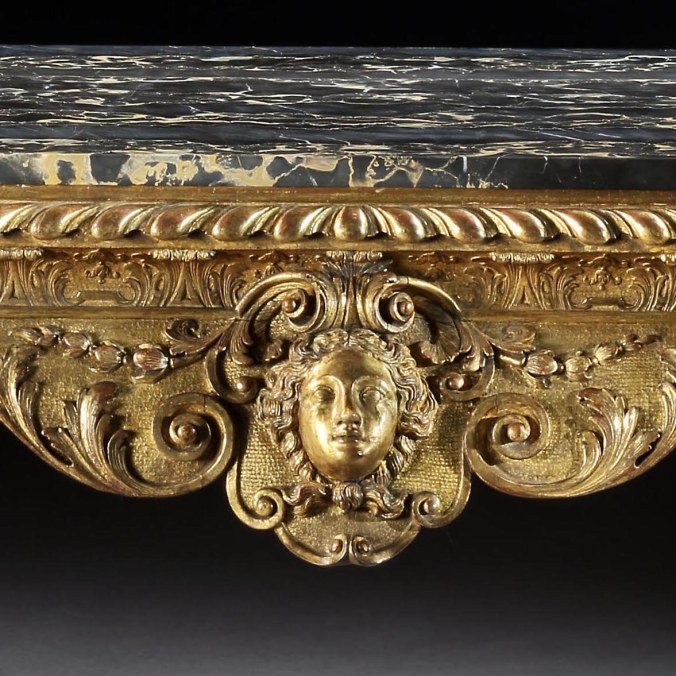 The Earls of Lovelace

Peter King, the 1st Baron King (1669-1734) of Exeter, Devon had an illustrious legal career and served as Lord Chancellor from 1725 to 1733. He married Anne Seys, daughter of Richard Seys of Boverton, Glamorganshire in 1704 and purchased Ockham Park, Surrey, in 1710 to serve as the family seat.  George I granted King the title 1st Lord King, Baron of Ockham in 1725.  Through successive generations, the family acquired Ashley Combe and Meyners in Somerset and Yarty House, Devon by the early 19th century.

William King-Noel, 8th Baron King (1805-1893), married August Ada Byron, the only legitimate daughter of the renowned poet George Byron, which brought the promise of vast estates in the Midlands.  In 1838, William became the 1st Earl of Lovelace as part of the elevations made to celebrate the coronation of Queen Victoria.  William’s wife Ada was a descendant of the Barons Lovelace of Hurley through her connection to the families of Byron, Milbanke, Noel, and Lovelace.

In 1840, William bought the East Horsley Estate in Surrey along with a great deal of land and houses in the surrounding area.  The house was originally built in 1828 by the famed architect Charles Barry (1795-1860) under the instruction of William Currie, a London banker, in the Tudor style.  William refashioned the Estate in the Victorian Gothic style inspired by his time on the Grand Tour on the Continent.  He also renamed the estate Horsley Towers after he incorporated a stuccoed tower and banqueting hall.