James Brydges, 1st Duke of Chandos in a print by John Simon after Michael Dahl
Yale Center for British Arm

For our next instalment of Period Portraits, our series looking at interesting historical characters and their artistic patronage, we are highlighting James Byrdges, Duke of Chandos.  Chandos was the first of fourteen children of Sir James Brydges, 3rd Baronet of Wilton Castle, Sheriff of Herefordshire, 8th Lord Chandos.

Chandos served as Paymaster-General of John Churchill, 1st Duke of Marlborough’s army.  He built a fortune that placed him amongst the richest men of his day and profited from this position by £600,000 when he resigned in 1713.  Rising through the peerage, Chandos became successively Viscount Wilton, Earl of Carnarvon, and Duke of Chandos.

Having acquired great wealth and influence, Chandos commissioned work from leading artists and architects.  Chandos was one of the most important 18th century collectors alongside Sir Robert Walpole and Sir Hans Sloane.  Chandos gained a reputation for great extravagance, but he is chiefly remembered as a patron and collector.  He acquired the majority of his collection between 1700 and 1720.  It was difficult to collect art directly from Italy due to the War of the Spanish Succession from 1701-1714, however he was still able to acquire some masterpieces from Italy.  He commissioned notable contemporary artists, including Michael Dahl, Sir Godfrey Kneller, William Kent, and Grinling Gibbons.

Chandos built a magnificent house at Cannons, his estate in Middlesex.  He commissioned the prominent architect James Gibbs to design the house for him ‘at vast expense.’

The Salon… is to be supported by Marble Pillars and painted by Paullucci [sic Bellucci]; as is the great Staircase, which is all of Marble… this Staircase leads you into the Royal Apartments fronting the Parterre and grand canal and consists of a Suite of six noble rooms well proportioned, finely plaister’d and gilt by Pargotti [sic Giovanni Bagutti] and the Ceilings painted by Paullucci, from these Apartments you go into my Lords dressing room and Library, fronting the gardens.

Cannons gained great renown, and collectors often opened their doors for public viewings and such visits at Cannons were so popular that visitor numbers had to be regulated.  Cannons was featured in an early travel guide in 1725 by Daniel Defoe, where he described,

This palace is so beautiful in its situation, so lofty, so majestick [sic] the appearance of it, that a pen can only but ill describe it… ‘tis only fit to be talk’d of upon the very spot… The whole structure is built with such a Profusion of Expense and finished with such a Brightness of Fancy and Delicacy of Judgment.

Chandos hosted George Frideric Handel at Channons for two years between 1717 and 1718, and the composer wrote his oratorio Esther and pastoral opera Acis and Galatea during his stay.

In addition to Cannons, Chandos acquired Shaw House in about 1727 from the Dolman family.  Shaw House was ideally situated as it was halfway between London and Bath and therefore made a convenient stopping point on this journey, which he appears to have made on a regular basis.  Chandos and his wife Cassandra very much enjoyed Shaw House and were dedicated to making it a comfortable home.

We are delighted to have an exceptional and very rare George I figured walnut, cross-banded and feather-banded bureau cabinet in our collection that was supplied to Chandos for Shaw House.

The bureau comes in two parts, the rectangular top with a pair of hinged sloping doors, each with reading rests and lined with silk velvet.  The interior is fitted with a velvet lined slide and a combination of drawers and pigeon holes.

The lower part is fitted with a pair of projecting panelled doors flanked by gilt bronze mounted Corinthian pilasters and three short concave drawers to each side, which stand above a shaped apron drawer with projecting blocks.  The sides of the bureau feature wonderful carrying handles. 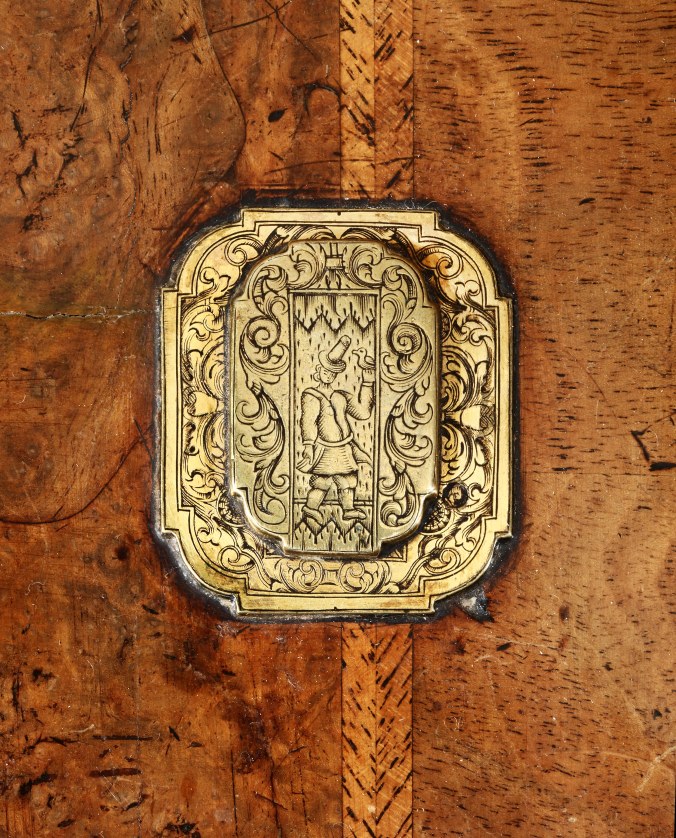 Detail of a George I Burr Walnut Bureau from the collection of Duke of Chandos for Shaw House, Berkshire
Mackinnon Fine Furniture Collection

The bureau is twice inscribed in ink on the inner backboards, ‘To His Grace The Duke of Chandos at Shaw Hall, near Newbury, Barks(sic).’

To read more about Chandos and his patronage of the arts, read Susan Jenkin’s impressive and fascinating book, Portrait of a Patron: The Patronage of Collecting of James Brydges, 1st Duke of Chandos.