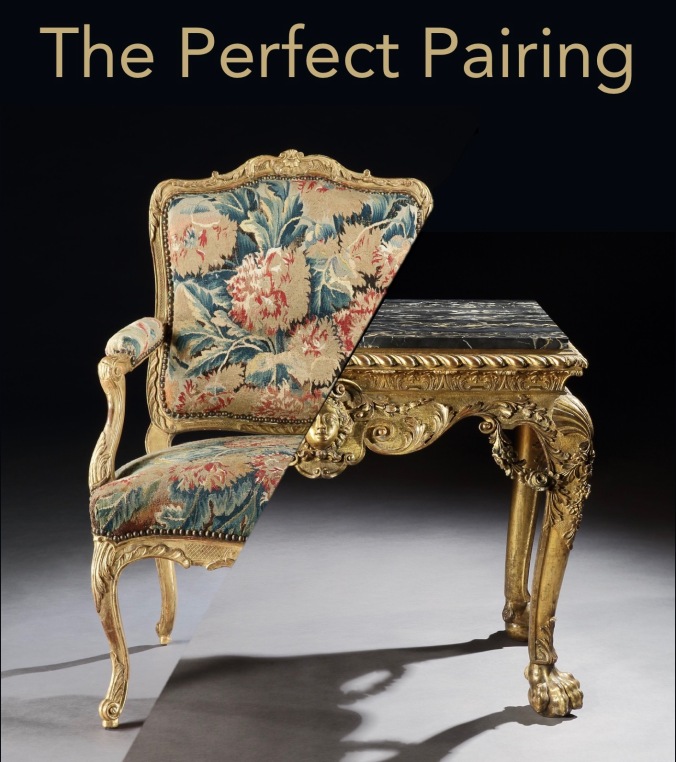 In our next instalment of ‘The Perfect Pairing,’ we are looking at a classic ensemble of furniture from the early 18th century known as a pier set.  This set would include a pair of torcheres which would flank either side of a pier table with a mirror hung above the table.  In the early Georgian period these sets were often done entirely in giltwood, and today we are sharing an example of torcheres and table that would have been placed together.

This magnificent pair of George I giltwood torcheres designed in the manner of James Moore each feature a circular dished top with tapering acanthus wrapped underside, which stands above a paneled faceted shaft carved with foliage, strapwork, and husk swags on double S-scroll supports.

The ‘Roman’ pattern for these tripod torcheres, which could be used to hold a vase or candelabra, was invented at the French court in the late 17th century and popularized by William III’s ‘architect’ and ornamentalist Daniel Marot (d. 1752) in his Oeuvres, 1703.  Certain design elements in these torcheres, such as similar Roman tripod claw-inspired scrolled feet, have marked affinities with a torchere in the Royal Collection at Hampton Court supplied by James Moore.

This exceptional George II carved giltwood table designed in the manner of William Kent features a boldly gadrooned edge above a central mask flanked by scrolling acanthus leaves and trailing harebells with swags of carved flowers.  The table stands on carved cabriole legs surmounted by superbly carved shells and stylised flowers and foliage which terminate in magnificent ball and claw feet.

The table reflects the influence of William Kent and his circle with its inclusion of the central mask and draped floral garlands.  A drawing in the Victoria & Albert Museum by Kent shows his design for a side-table at Houghton Hall, Norfolk, which was published in John Vardy, Some Designs of Mr. Inigo Jones and Mr. William Kent (1744, pl. 41).  This design features the prominent central carved mask and dramatic floral swags.

Keep an eye for pier sets the next time you visit Hampton Court, Buckingham Palace, or other regal interiors: this traditional concept from the 18th century lives on today in many historic palaces.